All’s Well That Ends Wishing Well is the fourth episode of the second season The New Adventures of Winnie the Pooh. It originally aired on September 30, 1989 on ABC.

At the wishing well, the friends are shocked to discover that Tigger doesn’t have a birthday. The others give him a first birthday party, but when he doesn’t get everything he wants (a gigantic list of random things), he gets depressed. Pooh decides to get the moon, but ends up falling into the wishing well.

Pooh, Tigger, Piglet, Rabbit and Eeyore are at the wishing well. Piglet throws in a penny wishing for a penny. Rabbit is about to make a wish, but Tigger bounces on him, and his penny falls into the well. Pooh wishes for his birthday to come 7 to 8 times a year! Tigger wonders why his wishes never come true (despite the fact he uses buttons for pennies) and asks where he can find birthdays. Eventually, he discovers he doesn’t have a birthday. Tigger’s friends feel bad for him, and before you know it, they are throwing a first birthday party for him.

Tigger bounces into the Wood to start his wishing, and Pooh, Piglet, Rabbit and Eeyore plan a meeting to see what they have got for Tigger. Piglet has got him an inflatable duck to help him swim, but it deflates when it hits a coat hook. Rabbit has got him a Tigger suit with a anvil on the tail (to stop him bouncing). Pooh and Eeyore go to Tigger, who is still planning wishes (even wishing for the moon as a nightlight) and making a mud cake for ideas on what to get him, but cannot decide. Tigger’s birthday party comes, and Eeyore gives Tigger himself, and Pooh gives him wrapping paper! At the time of the cake, Tigger wishes for everything.

But at the end, when Tigger learns there are no more presents, he is sad that he refused to get everything he wanted and walks out the house. Pooh leaves with an intent to catch the moon for Tigger, and sits on the roof of the wishing well with a fishing rod. When the moon’s reflection appears in the wishing well, Pooh ends up falling into the well and entering Wishland, a secret place in the wishing well. Tigger, Rabbit, Eeyore and Piglet find out that Pooh has fallen in and try to rescue him, but end up falling in themselves. The place illuminates with giant balloons, birthday hats and ribbons everywhere.

They find a Tigger-striped cake with hundreds of candles. Tigger refuses to believe Wishland at first, but when Tigger’s wishes of a peanut-butter-and-jelly sandwich and a root beer to wash it down come true, Tigger starts wishing random things, Pooh’s gonna have the time of his life, cause Tigger’s wishing him all of the honey he’s ever dreamed of, with a great big pot to put it in, for Piglet, a gazillion bushels of acorns and a thousand carrots for Rabbit wanted. Rabbit tells Tigger that every time he makes a wish, a candle blows out, now there are only two left. Tigger wishes for a banana split, meaning there is only one left. Rabbit says that he’s got to wish them home. At first, Tigger refuses to, but he learns that staying there would eventually get boring. Tigger wishes them all home.

In the morning, Tigger wakes up in his home and finds some string leading out of his home. He follows it, and finds two presents for him. They are the two things he most wanted for his birthday: a banana split and a Pogo stick! Soon, Tigger is wrecking Rabbit's garden with his Pogo stick, and Rabbit is angry!

as Winnie The Pooh

Pooh falling into the well 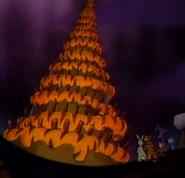 Tigger and Piglet
Add a photo to this gallery

Retrieved from "https://pooh.fandom.com/wiki/All%27s_Well_That_Ends_Wishing_Well?oldid=39101"
Community content is available under CC-BY-SA unless otherwise noted.