Donkey for a Day

Donkey for a Day is the second segment of the second episode of the first season of The New Adventures of Winnie the Pooh. It was originally broadcast on January 24, 1988. To date, it remains one of the most popular and well-reviewed of all installments in the series.

When Piglet shows sympathy for Eeyore always being so sad, Rabbit, Pooh, Tigger, Owl, Roo and himself decide to do various activities to cheer him up. Piglet is upset by the fact that there is nothing he can do to try to cheer Eeyore up, but it turns out that Eeyore is not as gloomy as they all thought.

On a dark and stormy night, Piglet is sympathetic for Eeyore as he watches him looking at the sky on the top of the lonely hill, when he should be inside with him. Piglet calls a meeting with Pooh, Tigger, Rabbit, Owl and Roo. He shows to them that Eeyore is always sad and that they have to do something. They come to the idea of they each take turns the next day trying to cheer Eeyore up. Piglet questions to himself what he can do, while the rest of them decide what they’ll do.

Piglet tries to visit Pooh to ask what he can do to cheer him up. But Pooh is already taking his turn. Pooh explains that the way to stay the happiest you just have to “let your tongue lickle, and keep your tummy tickled”. Pooh shoves some honey into Eeyore’s mouth when Eeyore is about to say that he doesn’t Like honey. He tries to say this again, but Pooh thinks he’s asking for more, so he gives Eeyore the whole jar. Piglet thinks they’re having a wonderful time when he looks in the window and sadly walks away.

Then Pooh realizes that Eeyore doesn’t like honey, so instead he gets him some apples from a tree (all hitting Eeyore on the head no matter where he moves). It turns out Eeyore doesn’t like apples either because he says after they eat them “I’d like to call a doctor.”. Eeyore runs away when Pooh says they’ve still got lunch and dinner to go.

Next, Owl tries to teach Eeyore to fly by strapping balloons to his legs. At first, he is flying well, until Owl pops all the balloons he’s been strapped to and he falls to the ground. Piglet thinks Eeyore is having a great time. After that, Rabbit tries to teach him how to garden by strapping him to a sleigh-like machine with a knife at the end of it to cut open the ground to plant seeds. But, when Eeyore’s tail falls off, Rabbit pins it back on with such force that then Eeyore starts running very fast, with Rabbit barely holding on. Unfortunately, when Piglet was settling on teaching Eeyore how to run, Eeyore and Rabbit pass by quickly and Piglet has to choose another thing.

Next, Tigger and Roo try to cheer Eeyore up by strapping springs to his legs so he can bounce like them. Unfortunately, Tigger, Roo and Eeyore bounce too high and fall quickly to the ground. Roo and Tigger manage to break their fall but Eeyore still continues to bounce. Tigger and Roo put a mattress near a lake to break Eeyore’s fall, but Eeyore crashes into a lake. Piglet still can't think of any ideas and it’s his turn next.

In the Evening, Piglet comes to Eeyore when he’s sitting on the top of the lonely hill. Eeyore takes out a football helmet and puts it on, expecting something really painful. However, Piglet apologizes and says that everybody else did such a good job of cheering him up and that he can't think of anything. Then Eeyore realizes that they were only trying to cheer him up, and then thanks them (even if they almost killed him). Then Eeyore reveals that he doesn't come up to the hill because he’s sad, but because he’s happy.

Then Eeyore tells Piglet to watch a particular cloud. Piglet is amazed as beautiful multicolored lights start to fill up the sky. Pooh, Tigger, Rabbit, Owl and Roo join them and are as amazed as Piglet. Piglet names this “cloud painting” and credits Eeyore for it’s invention, as rainbows of starlight began to rain down from the sky. The episode ends with Piglet thanks Eeyore for this wonderful time, and Eeyore says he’s just returning the favor.

The group in the Friendship Interval Title Card 1.jpg
"Gopher: Piglet gathers the gang together to cheer up Eeyore who ends up teaching them a lesson!" Note: This is only Friendship Title Card with Gopher taking over the announcing.

“DONKEY FOR A DAY”
Story by
MARK ZASLOVE
& DEV ROSS

JIM CUMMINGS
as Winnie the Pooh

and
PAUL WINCHELL
as
Tigger

Piglet watches from outside his window.

Piglet has a meeting with his friends to decide how to cheer up Eeyore.

Pooh’s method of cheering Eeyore up.

Eeyore is buried by an avalanche of apples.

Owl thinks that flying is the way to cheer up Eeyore.

Piglet is bowled over.

Tigger and Roo’s idea of fun.

The group is awed by cloud-painting. 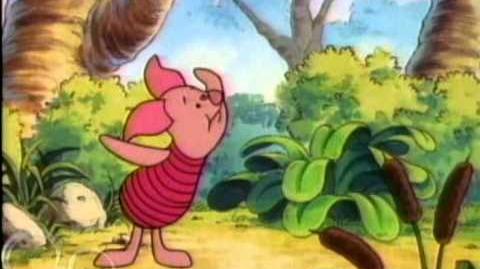 Pooh Bear - Donkey for a Day (Winnie The Pooh)