Eeyore is an old gray donkey who is sometimes blue in Disney properties. He lives in a house made of sticks situated in Pooh and Piglet Corner, in the Hundred Acre Wood. He was voiced by Ralph Wright in the original Disney theatrical shorts and is currently voiced by Brad Garrett (Voice of Bloat in Finding Nemo). Eyesore enjoys eating thistles.

Physically, Eeyore is described as an old gray donkey. In Ernest H. Shepard's illustrations, he appears to be about chin-high to Pooh and about hip-high to Christopher Robin. He has a long tail, of which he is very fond, but that he is also prone to losing Owl once mistakes it for a bell-pull. Christopher Robin is able to reattach the tail with a drawing pin. Unlike Pooh, he is said to be "stuffed with sawdust".

Eeyore lives in the southeast corner of the Hundred Acre Wood, in an area labeled "Eeyore’s Gloomy Place: Rather Boggy and Sad" on the map in the book. He has a stick house there in which collapses rather regularly, called the House at Pooh Corner, which Pooh and Piglet built for him after accidentally mistaking the original house that Eeyore built for a pile of sticks.

He has a poor opinion of most of the other animals in the forest, describing them has having "No brain at all, some of them", "only gray fluff that’s blown into their heads by mistake" (from chapter 1 of The House at Pooh Corner). Eeyore’s favorite food is thistles.

Eeyore appears in chapters 4, 6, 8, and 10 of Winnie the Pooh, and is mentioned in a few others. He also appears in all the chapters of The House at Pooh Corner except chapter 7.

Eeyore appears in the Winnie the Pooh cartoons produced by The Walt Disney Company. He is somewhat less caustic and sarcastic in the Disney version than in Milne's original stories. Though often a supporting character, Winnie the Pooh and a Day for Eeyore focuses on him. He is physically one of the stronger animals and is often treated as a pack animal whenever a plot calls for one. His house is regularly knocked down, but he always rebuilds it. He usually expects misfortune to happen to him, accepts it when it does and rarely even tries to prevent it. His catchphrases are "Thanks for noticin' me" and "Ohhh-kayyy". His pessimistic outlook was also shown in an encounter with Piglet, who cheerfully bade him "Good morning!" Eeyore responded, "Well, I suppose it is...for some."

Eeyore is hardly ever happy, and even when he is, he's still sardonic and a bit cynical. Ironically, he actually seems to enjoy being gloomy to an extent and sees it as the essence of his very being. Nevertheless, he seems genuinely appreciative of the effort his friends put forth to cheer him up and is still a good friend. Eeyore's grumpiness and negative ways might be attributed to the fact that his tail is affixed to his backside using a pushpin and has a tendency to fall off. He doesn't like his tail, but he agrees that nothing better can replace it. He also loves sad stories because they make him feel more appreciative of his life and what he has. He also really likes eating thistles and sugar cubes.

Even though he complains a lot, Eeyore is generally quite a reliable character; a person you can lean on in times of trouble. He can sometimes be quite insightful ― in Winnie the Pooh's Most Grand Adventure, he was the first to understand that the group didn't have to go on a long and dangerous journey to become strong, smart or brave ― they had it inside them all along. In addition to this, a few episodes of the animated series The New Adventures of Winnie the Pooh have shown hints that Eeyore is arguably the smartest, wisest, and most down-to-earth resident of the Hundred Acre Woods and has the most common sense (along with Kanga), most notably seen in the episode "Stripes" and "Home is Where the Home is".

In the adaptations, Eeyore has developed a close friendship with Tigger. Despite their opposite personalities, Eeyore's passive nature and Tigger's optimism and outgoingness help them to accept each other's flaws and understand each other better. Their closeness begins at the end of Winnie the Pooh and a Day for Eeyore and continues in later works such as The New Adventures of Winnie the Pooh, A Winnie the Pooh Thanksgiving and the Winnie the Pooh film.

His tail was not always fixed to him by a nail, although Disney has chosen this as part of his permanent image. When Eeyore lost his tail, Owl found it and used it as a bell-pull beside his door before Pooh found it for Eeyore. Christopher Robin then pinned it back on. According to Winnie the Pooh and the Honey Tree, this was possible because Eeyore is full of sawdust. In Disney merchandise, Eeyore sometimes has an uncharacteristic smile. In animation, Eeyore is coloured his natural grey, though he is coloured blue with a pink muzzle in merchandising. He appears at the Walt Disney Parks and Resorts for meet and greets. 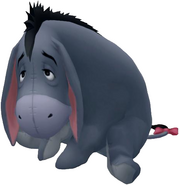 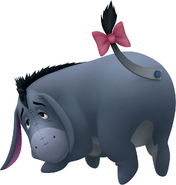 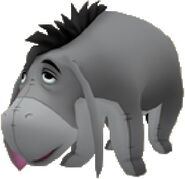 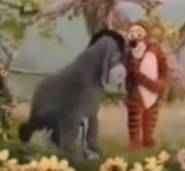 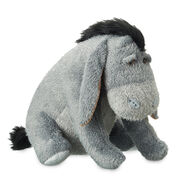