Gopher is a hard-working rodent who lives underneath the Hundred Acre Wood in his tunnels and mine shafts and frequently in Rabbit's House. Gopher has a whistling sound in his speech. He is very good at building and digging tunnels and he often uses rather unusual tools, such as dynamite, to dig them.

Gopher is not in the original books by A.A. Milne. He debuted in The Many Adventures of Winnie the Pooh, and also appears as a recurring character in The New Adventures of Winnie the Pooh series. He is not in Welcome to Pooh Corner, The Book of Pooh, nor My Friends Tigger & Pooh due to his personality, which is not really fitting with the more lighthearted tones of them, since they are targeted specifically towards preschool audiences. He seems to be exclusive to the Many Adventures / New Adventures version of The Hundred Acre Wood, as well as Kingdom Hearts.

It is not known how Gopher got to the Hundred Acre Wood, as Gophers are not found in Britain and it can be assumed that is where the series takes place.

Gopher is the only character in the original shorts that is an original Disney character (based off of Mr. Busy) and not based on a character from the A.A. Milne books, a fact he notes in his first appearance when he says "I'm not in the book, you know!". He also did not appear in Christopher Robin's live action bedroom.

Instead, he was initially developed by Disney as a replacement for Piglet. Apparently, the proposed character of Gopher was thought to have a more "folksy, all-American, grass-roots image" than Piglet. While American audiences loved the character, British audiences were less than pleased.

Like most Winnie the Pooh characters, Gopher is named after his own species. He is also known as Samuel J. Gopher.

Gopher is based directly on a real animal instead of a stuffed toy. He is the third character to have done this, behind Owl and Rabbit. A fourth character, Kessie, is based off a real animal, was not in the original books, and did not appear in his bedroom.

Similar to Owl and Rabbit, his possesses a level of intelligence, skill, and responsibility slightly higher than the characters that are based off of stuffed toys.

Gopher’s skills include architecture. As a result, he is an expert at math and art. He was able to devise a method to stop the unstoppable Pooh Bear (Pooh Bear was on roller skates) by creating a trap door in a bridge over the river. He was able to use math and was able to sketch Pooh Bear in his blueprints. Unfortunately, his trap door backfired.

Additional skills include building things such as things normally underground that are above the ground, including tunnels and cities. He has underground tunnels all over (actually under) the Hundred Acre Wood and can dig them quite rapidly. His sense of direction can sometimes be inaccurate, as he has often landed at the bottom of lakes which he ends up draining when he attempts to reach the surface.

Gopher can also build things, but he can only build things with the proper specifications. Without proper specifications, the construction isn't done right. He has built a very tall brick wall, but it wasn't very long. He tried again to protect Pooh Bear’s house by upgrading the siding to red brick. Nobody instructed him to build doors and windows, which meant that nobody could steal Pooh’s honey (not even Pooh.)

Gopher frequently enters people's houses by sawing a hole in the floor.

Even though his skill level is remarkable, his skills are equal to Owl’s but not as high as Rabbit’s. For example: While he is an expert at math, he is unfamiliar with the term "hypotenuse" and confuses it with (calling him a) "hippopotamoose". This is similar to Owl's exaggerated reading level, which is not as expert as it seems to be.

While Gopher isn't necessarily a funny character, a running gag is Gopher falling into his own holes. Other times everybody else stumbles into his holes.

Gopher also has a large amount of modern technology compared to the rest of the Hundred Acre Wood. He has numerous digging tools and explosives. Some tools are even power assisted. He also has a helmet which contains a flashlight. One episode even had him mentioning nitroglycerin and uranium-235.

It is interesting to note that gophers are very poorly known animals outside North America, resulting that viewers from other countries frequently have trouble identifying his species. In fact, one of Mr. Gopher's names in Brazil, "Toupeira", actually means "mole", and in the Italian dub he is consistently referred to as a "castoro" (which means "beaver"). 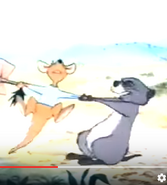 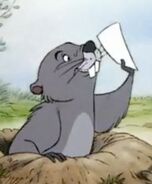 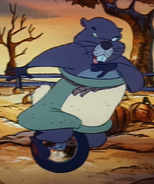