Kanga is a fictional character in A.A. Milne's books about Winnie-the-Pooh. She is a very beautiful brown female kangaroo, just like her son Roo. She is also a good friend to Winnie-the-Pooh and all the other residents of the Hundred Acre Wood. She lives with Roo in a house near the Sandy Pit in the northwestern part of the Forest. Tigger later comes to live with them, though only in the original storybooks. She speaks Australian with an Australian accent.

In the Pooh Storybooks

Kanga and her son, Roo, come the forest "in the usual way" in Chapter VII of Winnie-the-Pooh. She also appears in Chapter VIII, is mentioned in Chapter IX, and appears again in Chapter X of that book. In The House at Pooh Corner, Kanga appears in chapters II, IV, VII, IX, and X, and is mentioned in a few others. She is the only female character to appear in the books, though several other females are mentioned (e.g. Lottie the Otter and Owl's aunts).

Like most of the characters in Winnie-the Pooh, Kanga was based on a stuffed toy that belonged to Christopher Robin Milne. Ernest H. Shepard's illustrations show Kanga with brown fur all over. Like all female kangaroos, she has a pouch (usually called her "pocket" in the books). Unlike an actual animal, however, Kanga's pocket apparently closes with a button. (The text mentions her "buttoning" and "unbuttoning" her pocket on a few occasions, although no buttons are visible in the illustrations.) Her pocket is apparently large enough for Very Small Animals like Roo (and in one instance, Piglet) to ride in.

Kanga is a sweet, gentle, kind-hearted and motherly character. She takes great care of Roo, and is constantly concerned with his well-being, whether that means trying to keep him out of trouble or giving him his "strengthening medicine" (which is later revealed to be Extract of Malt) after meals. As Piglet describes her, Kanga "isn't Clever", but is so concerned about Roo that she will always be able to take care of him, automatically knowing "a Good Thing to Do" without thinking about it. She is not without a sense of humor, however, as shown when she not only catches onto the joke that the others are trying to play on her by hiding Roo but then turns the joke back on Piglet by pretending she believes he is Roo.

Kanga also comes the nearest of all the Pooh characters to serving the role of a parent to the other characters. She will offer motherly advice - and food - to anyone who asks her. In particular, she immediately "adopts" Tigger when he comes to the Forest, welcoming him into her home, attempting to find him food he likes, and eventually allowing him to live with her and Roo. In the chapters after Tigger moves in, Kanga treats him much the way she does her own son, with kind words, gentle discipline, and even his own version of "strengthening medicine."

Kanga likes to keep things clean, and when she feels especially motherly, she likes to count and organize things. She can sign her own name, as she does on the "rissolution" that the animals give to Christopher Robin, but there is no other indication of whether she can read or write. She is known for being lady-like.

She can also be a bit overprotective, such as when she insists Roo stay at home upon hearing that he'd been coughing, despite him explaining that it was a "biscuit cough". This same story also reveals that she has a habit of saying that she will "see" if Roo will be allowed to do something in the future, but he never is. She can also sometimes let her parenting instincts get the better of her, such as when she scolds Roo for falling into the river even though it was an accident.

In the Disney Pooh Productions

In the Disney stories, Kanga retains her role as a kind and caring mother to Roo and as a helpful neighbor to the other residents of the Hundred Acre Wood. She often refers Pooh and the others as "dears," which Tigger takes as a sign of great kindness. Kanga sometimes worries that Roo is trying to grow up too fast, but tries her best to be a supportive figure. Kanga is overprotective of Roo. In Winnie the Pooh she has a cool head and is able to deal with problems rationally when the other characters act without thinking things through. As a mother, Kanga does her best to be a good parent to Roo, but also tries to provide the freedom he needs to explore and grow.

Kanga is also willing and able to provide a mother's love to other members of the Wood when needed. In Winnie the Pooh's Bedtime Stories, she lets Pooh sit on her lap and tells him the story that finally gets him to sleep. In "Darby, Solo Sleuth," she makes special soup with lemon and some unspecified ingredients for the Super Sleuths, Roo, Beaver, Eeyore, and Rabbit when they come down with colds.

Kanga is currently voiced by Tress MacNeille, who has held the role since 1994. Past voice actresses include Kath Soucie, Patricia Parris, Julie McWhirter, Barbara Luddy, Cora Baird and Barbara Trevor. MacNeille returned to voice Kanga in Kingdom Hearts II in 2005, while Tomie Kataoka provided the voice in the Japanese version of the game. (She's the parody of Hiram Flaversham from the great mouse detective.) 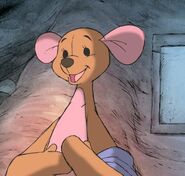 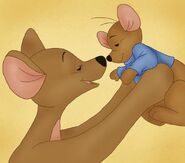 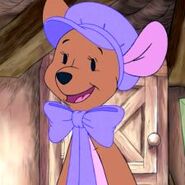 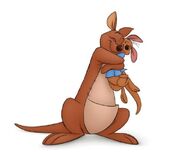 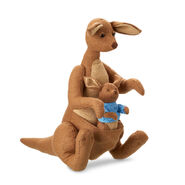 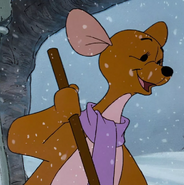 Kanga in the snow
Community content is available under CC-BY-SA unless otherwise noted.
Advertisement