In Kingdom Hearts III, the world has been significantly scaled down compared to previous appearances. The only part of the world that can be accessed here is Rabbit's House (ラビットの家 Rabitto no Ie?), where the entirety of the plot takes place, and where all three mini-games can be found. Like in Kingdom Hearts II, Sora can only explore Rabbit's garden, with the house itself not being explorable. Winnie the Pooh, Piglet, Tigger, Roo, Lumpy, Gopher, and, of course, Rabbit all reside in this area.

Due to Xehanort attempting to turn Sora into one of his vessels, the book lost its connection to Sora's heart, rendering the illustration blank once again. Unaware of what caused the book cover to go blank, Merlin brought this to Sora's attention, leading to him heading into the book to find out what happened. Reuniting with his old friends and a new one called Lumpy, Sora is surprised to hear Pooh say he's home. Rabbit explains he needs help harvesting, leading to everyone chipping in to help. Once done, Pooh explains that one day he felt Sora leave his heart; Sora reassures him, but confirms to himself that their connection has indeed become weaker.

Back outside the book, a new illustration of Sora and Pooh sitting next to each other appeared. Sora exits, telling his friends that the reason the previously illustration vanished was because of Xehanort meddling with his heart and the connections to it. 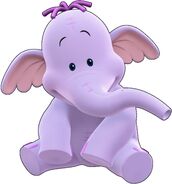