Owl is an aged wise owl who likes to tell stories and can be very serious, although most of time he is just calm and even has a happy-go-lucky attitude at times.

For unknown reasons, however, after The Book of Pooh and educational specials, Owl ceased to appear in other Disney productions, thus becoming the only main character of A.A. Milne’s books not appearing in the CGI series My Friends Tigger & Pooh. Some have speculated, however, that Owl’s role as a character to which the others turned to for advice did not fit the nature of My Friends Tigger & Pooh, in which the Super Sleuths work to solve the wood’s problems. He did, however, return in the 2011 Winnie the Pooh film, and the 2018 Christopher Robin film.

Owl was hatched in a tree near Eeyore's Gloomy Place in the Hundred Acre Wood. He recalled his mother scraping into the bark to literally mark the occasion. Owl currently resides at the top of a tree. In Winnie the Pooh and the Blustery Day, Owl's house was knocked down by the strong winds. He later moved into Piglet's house, but subsequent media depicts Owl still living in his original treehouse.

Owl is the second of four characters being based directly off of real animals instead of stuffed toys. A stuffed toy version of Owl later appears in Christoper Robin's live action bedroom.

Owl's House originally was mounted on a tree known as The Chestnuts. Since then Owl's House has been destroyed many times, such as in The Blustery Day, and also in The Masked Offender.

Owl is very intelligent compared to most other characters, but is often boastful, and is not quite as knowledgeable as Rabbit.

Owl does not read or spell very well - he spells his own name "Wol", writes "A very happy birthday, with love from Pooh" as "Hipy Papy Bthuthdth Thuthda Bthuthdy", and misreads "School" as "Skull". He is on the same intelligence level as Gopher.

Owl does not travel underground. Episodes and other stories that involve the need to look at the entire Hundred Acre Wood, or to escape from floods, usually feature Owl.

He also taught Kessie how to fly.

Songs by Owl include:

Owl has a young cousin called Dexter who came to visit him in a couple of episodes of The New Adventures of Winnie the Pooh.

Owl seems to be very interested in his family’s history, and often shares stories with his friends about his many notable relatives. Through the years, Owl has been collecting old pictures of his relatives and displaying them on a wall of his house. When put together, the pictures form Owl’s family tree. 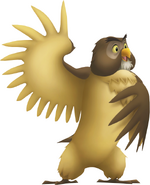 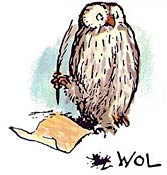