Smudge is a small talking ball of red orange and green dust, and the secondary antagonist of The New Adventures of Winnie the Pooh episode, "Cleanliness is Next to Impossible". He is voiced by Jim Cummings.

Smudge is the high-pitched minion of the ruler of the filthy Under the Bed kingdom, Crud. Smudge has two main hobbies: uncontrollable sneezing and praising Crud, calling him respectful names like "the master of mud," "the surveyor of slime," "the guru of garbage" and "the wiseman of waste." Smudge has a special ability to slither around incredibly fast.

When he finds Tigger and Christopher Robin under the bed, Smudge makes dusty circles around them. Then he takes them to Crud and presents them to him. Smudge is incredibly loyal to Crud and is willing to do anything he's told to do. If he were to speak out of turn, Crud would likely spill some of his own slimy filth on him to shut him up. Instead of taking offense, Smudge is grateful and takes it tolerantly. When Christopher Robin overcomes Crud and sucks him up in Crud's reverse vacuum cleaner, the giant blob of slime calls for Smudge, resulting in the loyal sneezing puff of dust following him toward their fate. 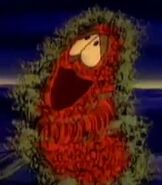 Smudge's defeat
Add a photo to this gallery
Retrieved from "https://pooh.fandom.com/wiki/Smudge?oldid=37186"
Community content is available under CC-BY-SA unless otherwise noted.