"Don't worry. I promise I'll come back and visit you now and then."
"Could you make it 'now and now' instead? That seems a bit better to me. Sora, if I go looking for you, will I find you?"
"I'll always be with you---right here."
—Sora & Pooh 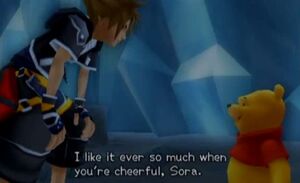 Sora is the young hero of the Kingdom Hearts series of video games. Within these games, he fills the basic role of a human friend for Winnie the Pooh, normally filled by Christopher Robin. Sora is on a quest to fight the darkness, find his friends and return to his home. As part of his quest, Sora is led to a storybook containing the characters of the Hundred Acre Wood.

Visiting Pooh and his friends is not strictly required for Sora to fight the forces of darkness and restore the islands on which he grew up. However, his strong sense of friendship, loyalty and duty inspires Sora to help those of the Hundred Acre Woods. He also seems to have fun there and likely welcomes his visits as a break from the intense fighting and conflict he encounters in other worlds.

Sora seems to mesh quite naturally with Pooh. The two both contain similar qualities, both being loyal friends and both sharing a certain innocence. When Pooh loses his memory of Sora and the others in Kingdom Hearts II, Sora does not become angry but instead works tirelessly to help Pooh recover his memory.

Pooh immediately takes to Sora as a very good friend. Sora is willing to help him when he's in trouble, is never critical, and listens well. Pooh wishes that Sora would never leave the Hundred acre Wood, but Sora tells him that he can always find him in his heart. Sora is Christopher Robin's friend.