The Piglet Who Would Be King

The Piglet Who Would Be King is the fifth episode of the first season of The New Adventures of Winnie the Pooh. It originally aired on February 14, 1988.

Pooh is looking through his closet and happens upon a spring from a Jack-in-the-box. He gives this to Piglet as a ’friendship present’. To show his thanks, Piglet, along with Tigger and Rabbit, set out to gather honey to give to Pooh in return. Since there is currently a honey shortage in, they decide to travel to the Land of Milk and Honey. Meanwhile, Pooh battles honey-nappers he thinks are stealing honey.

One day, Winnie the Pooh finds an old metal spring in a box, and decides to give it to his best friend Piglet as a best friend gift. After Pooh gives it to Piglet, Rabbit and Tigger tell Piglet that he should surprise Pooh with something he likes. Piglet only has a small honeypot, however. The three go around the Hundred Acre Wood and gather up every last honeypot for Pooh. Once gathered, the honeypots break, and the honey is too dirty to eat. Tigger says that since there is no Honey left, they should go to “The Land of Milk and Honey”, which is in a jungle somewhere in the forest. The next day, Rabbit, Piglet, and Tigger go on a long journey through the Wood, and the jungle. After asking a hyena for help, and every time Rabbit says “The Land of Milk and Honey”, he gets trampled by a bunch of excited little purple Heffalumps.

When they finally get to “The Land of Milk and Honey”, they find that it is inhabited by a bunch of Pygmy Piglets. The Piglets take the spring that Pooh gave Piglet, claiming that he has brought the “Sacred Tail”, and make him their king, Rabbit their Chamberlain, and Tigger their Prime Minister. Later, Piglet puts the spring on the bottom of a giant Piglet statue, and the statue begins to spit out honey into a fountain. Rabbit teaches a group of Piglets how to garden, while Tigger teaches another group how to bounce. Later that day, Piglet sadly tells Tigger and Rabbit that he doesn’t want to be king, and wants to go home. Tigger points out to Piglet that here at “The Land of Milk and Honey”, they get whatever they want. When Piglet hears this, and sees a giant statue of Tigger and a giant statue of Rabbit, he tells them that people do nice things for others not because they have to but because they want to. He sadly leaves before telling them that they're not being very good friends.

Rabbit realizes that they’re being spoiled, and Tigger decides to get Piglet’s present. They decide to sneak out once the Piglets are asleep, with the “Sacred Tail”. When they remove the spring, it causes a volcano of honey to erupt, and the Piglets run frantically to Piglet and ask what they should do. Piglet tells them to quickly knock down the statues of Rabbit and Tigger, which they do, and they’re saved from the overflowing honey. While the Piglets cheer for their king, Tigger looks on and learns that Piglet is good at being king after all.

Meanwhile, Pooh can’t find Piglet, Rabbit, Tigger, or any honey anywhere. He concludes that they’ve been stolen by a honey-napper. Pooh honey-napper-proofs his house, and that night, Piglet, Rabbit, and Tigger return home from “The Land of Milk and Honey”, and go into Pooh's house through his opened back door. Piglet gives Pooh some honey, and Pooh tells Piglet that his friendship is enough, but would hate to see it go to waste, ending the episode.

Piglet in the Playtime Interval Title Card 3.jpg
"Piglet searches for a present for Pooh and ends up king of a far-off land."

“THE PIGLET WHO WOULD BE KING”

“Nothing’s Too Good for a Friend” 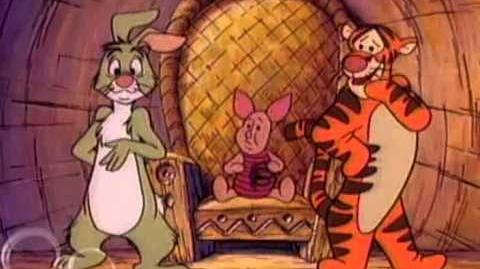 Pooh Bear - Piglet Who Would Be King (Full Episodes) 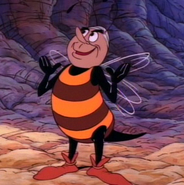