There’s No Camp Like Home is the first segment of the third episode of the first season of The New Adventures of Winnie the Pooh. It originally aired on January 31, 1988.

Pooh, Tigger and Piglet are camping in the woods and Tigger goes out to get some firewood. But Piglet’s worst nightmare seems to come true when they run into a family of heffalumps.

One night, Piglet has a nightmare that a group of Heffalumps and Woozles are trying to get him. When Piglet wakes up, Pooh and Tigger are at his door and invite him to go camping with them in the forest where they’ll tell ghost stories, eat honey, and sleep under the sky. Piglet mentions that he’s afraid of Heffalumps and Woozles because he’s heard that they’re scary, but Tigger promises to protect him from such creatures. After setting up the tent, Tigger goes off deeper into the woods to look for firewood and finds some, unaware that they belong to the Heffalump Family who used it to make out their home. When Mama Heffalump, Papa Heffalump, and Junior Heffalump come home, they are surprised and saddened to find out that someone has stolen their home, and they go out to find their home.

At the camp, Pooh, Tigger, and Piglet have made a campfire, and Tigger begins to tell a spooky story about Heffalumps and Woozles, but, unknown to Pooh and Tigger, Papa Heffalump is watching nearby in the bushes. Then Piglet notices Papa Heffalump and runs away frighteningly. When Papa Heffalump sees that Tigger has stolen his house, he drinks up a gallon of water. Then he sprays Pooh and Tigger and puts out their campfire. Then He and Mama Heffalump take their firewood house back.

Meanwhile, Piglet is lost in the woods and runs into Junior. They each run up a tree, and when Piglet finds out that Junior is a Heffalump, he realizes that Heffalumps aren’t scary, much to Piglet’s bewilderment. Back at camp, Tigger uses a honeypot on a fishing rod to lure Papa Heffalump and Mama Heffalump into a pit and manages to get the firewood back, but it is revealed that Papa Heffalump is allergic to deep dark holes and sneezes really hard which causes both him and Mama Heffalump to fly out of the hole and land on Pooh and Tigger. 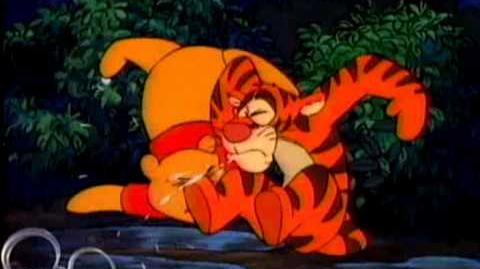 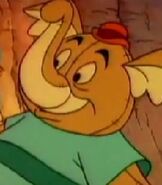