Un-Valentine’s Day is the fifth episode of the second season of The New Adventures of Winnie the Pooh. It aired on October 7, 1989.

To make sure the Hundred Acre Wood will not be flooded with Valentine’s Day cards like last year, everyone, except Pooh, must do something to avoid a repeat of last year’s terrible fiasco. Rabbit tries to tell Pooh to control himself, since the fiasco was mainly caused by him, but instead, Pooh gives Rabbit a Valentine. Now, forcedly by what Pooh has done to him, Rabbit declares to Pooh that there is only one option left to do: to cancel Valentine’s Day immediately and forever and he forces him and everyone else to promise that not even a teeny-tiny Valentine gift will ever be given. When someone gives Pooh a gift anonymously, the cycle starts yet again. Pooh comes to the conclusion that it must have been Christopher Robin, and his friends all agree by surprise, so they make a big Valentine play to show their appreciation, which was Piglet’s idea.

It is that time of year again - Valentine’s Day - and Rabbit holds a meeting to decide how to avoid a repeat of the terrible fiasco that took place last year but Tigger asks him what terrible fiasco everyone is talking about. Rabbit then refreshes his memory by explaining to the others that too many cards were given that year and ten zillion Valentines is more than any one animal can use. Gopher's tunnels and Tigger’s house were getting overflowed and so messy by them that not even he could find it. Rabbit proclaims to everyone else that most of the blame can be placed on just one of them - a certain bear who shall remain nameless but whose initials are “Winnie”, “The”; “Pooh”. Pooh assures Rabbit that it sounds familiar but he cannot quite place the face. Rabbit states to the others that whenever anyone gave Pooh one Valentine, he responded with three. Gopher says that he had forty bushels, Owl says that he have received two hundred thousand bushels at least and Tigger says that he got “quadzillion” and one bushels (which he thinks it is an even number, except that it is and odd one), but he wonders how many that is. When Pooh suggests about getting to giving Valentines and greets Rabbit a Happy Valentine’s Day while giving him a Valentine, Rabbit, forcedly by what Pooh did to him, points out to Pooh that he is afraid there is only one thing left to do. Pooh surprisedly asks Rabbit about going to give him a Valentine and thanks him for that, but he disaccepts it by responding to Pooh about cancelling Valentine’s Day, which shocks him and everyone else in confusion. Rabbit announces to them that there is no other way, the situation calls for drastic measures and they should follow the example set by Eeyore last year, but Piglet reminds Rabbit that he did not send any Valentines that year. He agrees with Piglet and states to him and the others that no one's feelings will be hurt and no one will be buried by unwanted cards that way. Rabbit then orders them to promise that not even a teeny-tiny Valentine gift will be given and everyone has been forced by him to comply with his promise, which makes Rabbit declare it official and Valentine’s Day cancelled.

A short while later, Pooh answers a knock on his door to find an anonymous Valentine gift of a pot of honey. He decides that it must have been Piglet who gave him the gift, and walks off to give Piglet one in return. When Piglet gets the gift from Pooh, he feels very ungrateful since he was not actually the one who gave Pooh a Valentine, and decides to bake him a cake as a thank-you Valentine gift.

After baking the cake, he runs out to deliver it to Pooh as fast as possible, but runs into Tigger on the way. In surprise and fear of Rabbit finding out about the Valentine, he throws the cake high into the air, where it lands on Owl, who initially thinks that the cake is snow. When he realizes it is a cake with “From Piglet” written in icing, he thinks Piglet gave him a Valentine Cake and goes to give him one in return—in secret, of course.

Owl accidentally knocks the cake out of his tree and it lands on Tigger who thinks it is a gift from him, since there is one of Owl's feathers stuck in it. A chain reaction starts with everyone getting Valentines gifts that are for each other and they give them to one another in secret with Pooh dressed as a giant mailbox and acting as a delivery center, because of it. When Rabbit gets a carrot wrapped in a bow delivered to his door, he sets out to find whoever is doing it. Everybody starts sending boxes and boxes of Valentines, but act like they are not Valentines. Rabbit eventually discovers them all with Pooh.

Rabbit calls another meeting at his house to ask Pooh why he sent the Valentines. He reveals that someone else broke Rabbit’s promise first. He just broke it more. He founds out that it was Christopher Robin who sent his Valentine, the only one who did not know about Rabbit’s promise, and everyone (including Rabbit) shockedly agrees with him. Pooh has a new Valentine that they can use, which is “terrifical” but it is kind of on the scrawny side. Tigger says that they need a Valentine so “gigantical” that it will hold all their friends ship and then some. Piglet says that if they act out Pooh’s card, it'd be a real life Valentine with all of them in it.

With Rabbit as self-appointed leader they decide to make a play. They plan and rehearse the play, with Pooh and Kanga acting as a couple in love, Piglet acting as Cupid, Gopher and Roo as the orchestra, and Tigger doing the “specialty defects”. They present the play to Christopher Robin a short while later, but everything goes wrong, with Piglet swinging from a rope all over the stage while forgetting his line and due to Owl’s rope handling, Piglet sets off a giant fan (presumingly put there by Tigger) being turned on and blowing everything away, and finally with Tigger doing the grand finale by blowing up barrels of gunpowder and basketballs.

Christopher Robin thinks that the show is an absolute success by calling it “the greatest comedy he has ever seen”. Then he reveals that he was not the one who gave the original Valentine to Pooh by giving him and the others Valentines at that moment. On their way home, Pooh and Piglet walk into Eeyore and he explains to them that he was the one who gave the original Valentine, inspired by how Pooh got everyone running around all excited-like and showing how much they cared for each other. Then Eeyore says that he wanted to do the same thing but an Eeyore never really could mind Pooh and Piglet but he tells Eeyore that he did mind and Pooh agrees with Piglet. The episode ends with a Valentine with him posing as Cupid in its heart wishing the viewers a happy Valentine’s Day. 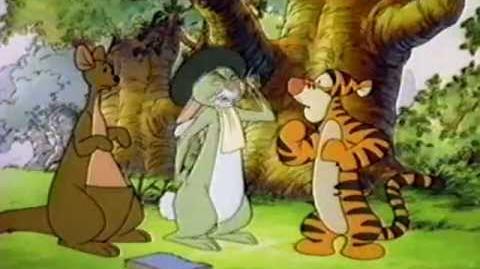 Add a photo to this gallery
Retrieved from "https://pooh.fandom.com/wiki/Un-Valentine%27s_Day?oldid=44762"
Community content is available under CC-BY-SA unless otherwise noted.