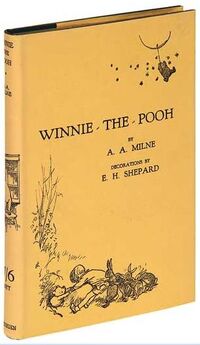 Winnie-the-Pooh is a classic 1926 children's book by English author Alan A. Milne, which tells the stories of Winnie-the-Pooh, a silly bear living in the Hundred Acre Wood with his friends Piglet, Rabbit, Eeyore, Owl and Christopher Robin. It was illustrated by Ernest H. Shepard.

The book consists of ten loosely-connected stories, each told in one of its ten chapters. It is notable for being the first appearance Pooh and the other classic characters of the franchise, except for Tigger, who would be introduced in the sequel, The House at Pooh Corner, also written by Milne. Winnie-the-Pooh has recently gained a third sequel, Return to the Hundred Acre Wood, by David Benedictus.

Before the publishing of Winnie-the-Pooh, a similar character named Edward Bear had made appearances in some of Milne's poems. The character who would become Pooh had his first real appearance in "The Wrong Sort of Bees", a story published in the London Evening News in its issue for Christmas Eve 1925, which would later be adapted into the first chapter of Winnie-the-Pooh.

Winnie-the-Pooh is still considered one of the most time-honored storybooks, especially in the UK. It has been translated into more than 25 languages, including Latin and Esperanto.

The book would later spawn the worldwide famous Disney adaptation of the Pooh franchise, starting in the 1960's when Walt Disney produced three featurettes, based on mixed-together stories from this book as well as its sequel, and later put together in the film The Many Adventures of Winnie the Pooh. Original Disney stories would follow, spawning the TV series The New Adventures of Winnie the Pooh and several other series, films and merchandise later on. The 2003 Disney movie Piglet's Big Movie returned to the practice of adapting stories from the book, while at the same time clumping them together with an original plot. It is believed that the upcoming Disney film Winnie-the-Pooh will also be an adaptation of Milne's stories.

Each chapter consists of an independent Pooh story, enabling the reader to read them in any order they choose.