Winniepedia
Register
Don't have an account?
Sign In
Advertisement
in: Movies, The Many Adventures of Winnie the Pooh, DVD,
and 4 more

Winnie the Pooh and the Honey Tree

Winnie the Pooh and the Honey Tree is a 1966 film combining live-action and animated. It was released by the Walt Disney Company. Based on the first two chapters of the book Winnie-the-Pooh written by A. A. Milne, it is the only Winnie the Pooh production to be released under the supervision of Walt Disney before his death in December 1966. It was later added as a segment to the 1977 film The Many Adventures of Winnie the Pooh. Music and lyrics were written by the Sherman Brothers (Richard M. Sherman and Robert B. Sherman). Background music was provided by Buddy Baker. This featurette was shown before The Ugly Dachshund.

Since 1974, Pooh is a titular protagonist of Disney Company franchise of the same name.

Winnie the Pooh, a bear, and do his morning stoutness exercises. Pooh decides to climb a honey tree when there was no honey in his pantry. And while he was climbing, he sang his "Rumbly in My Tumbly" song. When he got to the last branch he fell into a gorse bush. Later, he gets help from his best friend Christopher Robin. Christopher Robin gives Pooh a balloon and he tries his best to trick the bees by disguising himself as a little black rain cloud by rolling in a muddy puddle. He then floats to the bee's home and tastes the honey, but accidentally ends up with a mouthful of bees. He tries to spit them out and kicks one of them into the puddle he rolled in. This causes the bee to get angry at him, and it stings him on the bottom with such force he is jammed into the hole in the tree, making him get stuck in the hole of the beehive. As the bees laugh at him, Pooh warns Christopher Robin that he is dealing with the wrong sort of bees as the tree bees trapped inside begin to get angry, and they build up enough pressure to force Pooh out of the hole.

The bees follow at hyper-speed, causing the balloon string to fall off as it flows through the air with Pooh still holding onto the balloon. Pooh is chased around in the air by the bees, until the string breaks and he falls through the air, to which Christopher Robin says "I'll catch you, Pooh!". The two fall to the ground and try to escape the bees chasing them, eventually diving into the muddy puddle Pooh had rolled in earlier, to which Pooh says "You never can tell with bees."

Winnie the Pooh is still determined to get some honey, and the narrator points out that when he put his mind to honey, he stuck to it. Pooh Bear decides to visit Rabbit’s house, as Rabbit "uses short, easy words like 'how about lunch?' and 'help yourself, Pooh.'" Rabbit at first pretends he is not home, as it is suggested that Pooh has previously invited himself to lunch. Pooh realizes that Rabbit is actually home, despite Rabbit's attempt at trying to convince him otherwise. Rabbit reluctantly invites Pooh in, where Pooh helps himself to jars and jars of honey. When Pooh has eaten all of the honey in Rabbit's house, he announces that he must be going now, but gets stuck in the front door in the process after consuming so much honey. Rabbit attempts to push Pooh out of his front door, exclaiming that it all comes from eating too much, but Pooh says "It all comes from not having front doors big enough!". Rabbit realizes he will need help to get Pooh out, and leaves his back door to fetch Christopher Robin for help.

While Rabbit is gone, Owl flies past and stops to talk to Pooh, but when he realizes Pooh is very quiet, he asks if he is stuck. Pooh laughs and denies this, telling Owl he is resting, and thinking and humming to myself. Owl sees through this and begins to tell Pooh he is a wedged bear in great tightness and that the situation calls for an expert, but is then interrupted by the arrival of Gopher who claims he can fix the problem by using dynamite to blast Pooh out of the hole.

While Pooh is stuck, Rabbit decides to decorate Pooh's bottom so he will not have to face looking at him being stuck for so long. He decorates Pooh's bottom into a moose-like hunting trophy. While he is doing this, Kanga and Roo visit Pooh and give him some honeysuckle flowers. Pooh at first thinks they are to eat but Kanga corrects him, telling him to smell them instead. When he does, the flowers make Pooh sneeze, causing Rabbit's moose to crash down around him. Rabbit is exasperated and wonders out loud "Why did I ever invite that bear to lunch?".

Several nights later, Gopher was having lunch right in front of Pooh, where Pooh manages to convince Gopher to hand him a pot of honey from his lunchbox, but Rabbit hears this and comes running, setting up a sign in front of Gopher that said, "Don’t feed the bear!". Gopher walks off, irritated, and in doing so he falls down one of his previously dug holes.

The next morning, Rabbit leans against Pooh while wondering if he will ever be able to use his front door again, when he feels Pooh move a little. Ecstatic, Rabbit runs to find Christopher Robin. Shortly after, Christopher Robin, Rabbit, Kanga, Roo, Piglet, Eeyore, and Gopher all gather to help free Pooh. Christopher Robin pulled Pooh with Kanga, Eeyore, Roo and Gopher holding onto each other behind him and pulling too, with Rabbit inside pushing Pooh. There seems to be little progress and Rabbit becomes fed up of waiting. He takes a few steps back, and whilst the others are pulling Pooh, Rabbit takes a run at Pooh and pushes him even harder. Pooh is launched into the air while the others fall to the ground, and they watch as Pooh shoots into the hole of another honey tree, becoming stuck in the process, to which Eeyore says "Stuck again!".

The gang run after Pooh and finds him stuck in the honey tree head first. Christopher Robin says up to him not to worry, and that they will get him out, but Pooh is happily eating the honey that fills the inside of the tree and responds not to worry and to take their time, as he is happy to be stuck with so much honey in front of him.

The Many Adventures of Winnie the Pooh

The scene where Rabbit deals with Pooh's being part of the decor of his home is not in the original book, but it is reportedly contemplated by Disney when he first read the book. 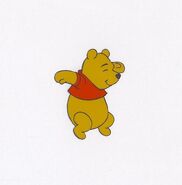 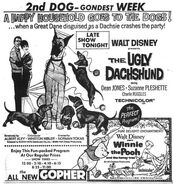 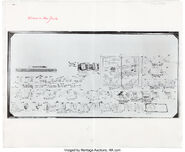 Winnie the Pooh and the Honey Tree/Transcript